The Tides of Day and Night 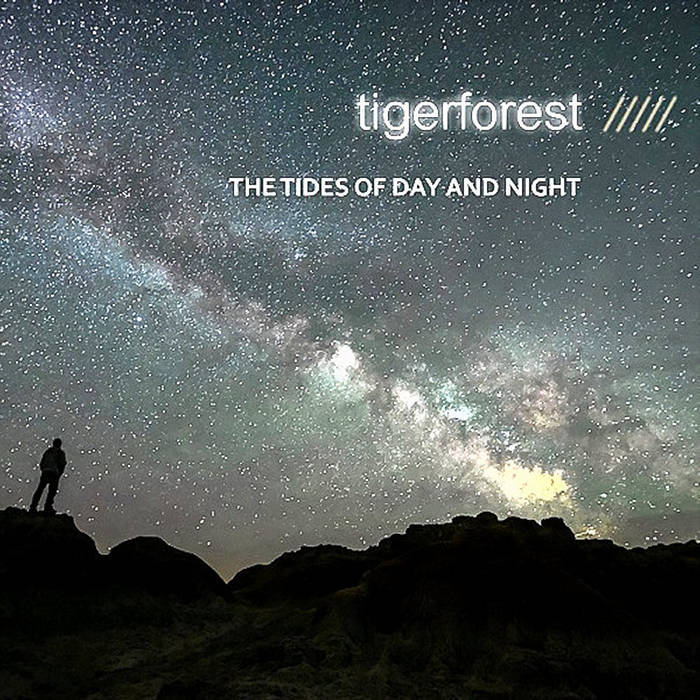 There’s always a danger in composing melodic electronic works, especially if you have a penchant for orchestral arrangements, dramatic musical effects and a touch of bombast. Tilt a little bit in the wrong direction and you become Yanni. But Tigerforest avoids lapsing into saccharine sentimentality. Instead, on The Tides of Day and Night he creates an expansive and immersive journey.

Gunnar Spardel is the musician behind Tigerforest. The name is a play on the Taiga forests that cover much of the far northern hemisphere, extending into the Arctic Circle. Spardel is German, but lives in New Hampshire now, where he sculpts expansive electronic orchestrations like The Tides of Day And Night.

A child of electronic music and Spardel bears the influence of his German forefathers, such as Tangerine Dream, as well as Pink Floyd who are referenced in the sonar ping that opens the first track “Asylum Harbor.” But Tigerforest’s sound is more opulent and orchestral, a la Vangelis, and also employs many of the sound designs of contemporary electronic music, from Trance to Dream-Pop.
A largely self-taught musician who has played synthesizers since age 12, Spardel has a remarkable command of orchestration, arrangement and dynamics, as revealed across the 71 minutes of The Tides of Day and Night. It’s immediately evident that he’s worked in cinema: he’s scored low-budget films like Dead Men and Dumar: The Rising.

His music is propulsive and driving. Although the title of “Find the Tree” makes seem like it would be a pastoral work, this is more of a charge into the breach, with driving percussive rhythms, stratospheric synth pads and thundering orchestral chords. Tracks like “Chasing Starlights” use aggressive synthesizers on stun, lacerated by thunderstorm percussion and sci-fi Theremin from Amethyste.

There are three lyric vocal tracks on the album, which Tigerforest weaves into the fabric of the album’s sound, landing somewhere between New Age, electronica and pop. The best of them is “Why Don’t You Answer” with lyrics and vocals by Kim Berry. She’s usually a more conventional acoustic-based singer-songwriter, but here she’s an electronica chanteuse, singing double-tracked vocals in this sweeping song of love.

Spardel collaborates with French electronic composer Stephane Klepper a.k.a. “Eskadet” on “Geometry of Shadows.” Trading sound files back and forth on the internet, they stretch out in a long, slow motion arc of melodic, hypnotic cycles. The piece is brushed by strange sound effects that could have been lifted from the thrillers he has scored.

A surprise guest on the album is SoCal guitarist David Helpling, who has made many great recordings on the Spotted Peccary label, both solo and with Jon Jenkins. He’s credited with “Liquid Guitar” on two tracks, which means he lays down reverb-drenched arpeggios on “Across the Silent Seas” and echo-delayed accents that evolve into a heartbreaking melody on “Awakened by Silence.”

Longtime collaborator Amethyste appears on five tracks playing Theremin and lending her wordless vocals to driving excursions like “The Endless Road,” which sounds like it could be in a Disney film, if Disney soundtracks weren’t schlock. Tigerforest avoids that pitfall on The Tides of Day and Night, a widescreen experience that you can view in your mind.

Music means much more to me than playing white and black keys together in some harmonious or disharmonious accordance and order. It’s more than making impressive eclectic soundscapes or sequences with some content. Music is my life. Music is my playground of emotions and at each time the mirror of my innermost being. ... more

Bandcamp Daily  your guide to the world of Bandcamp